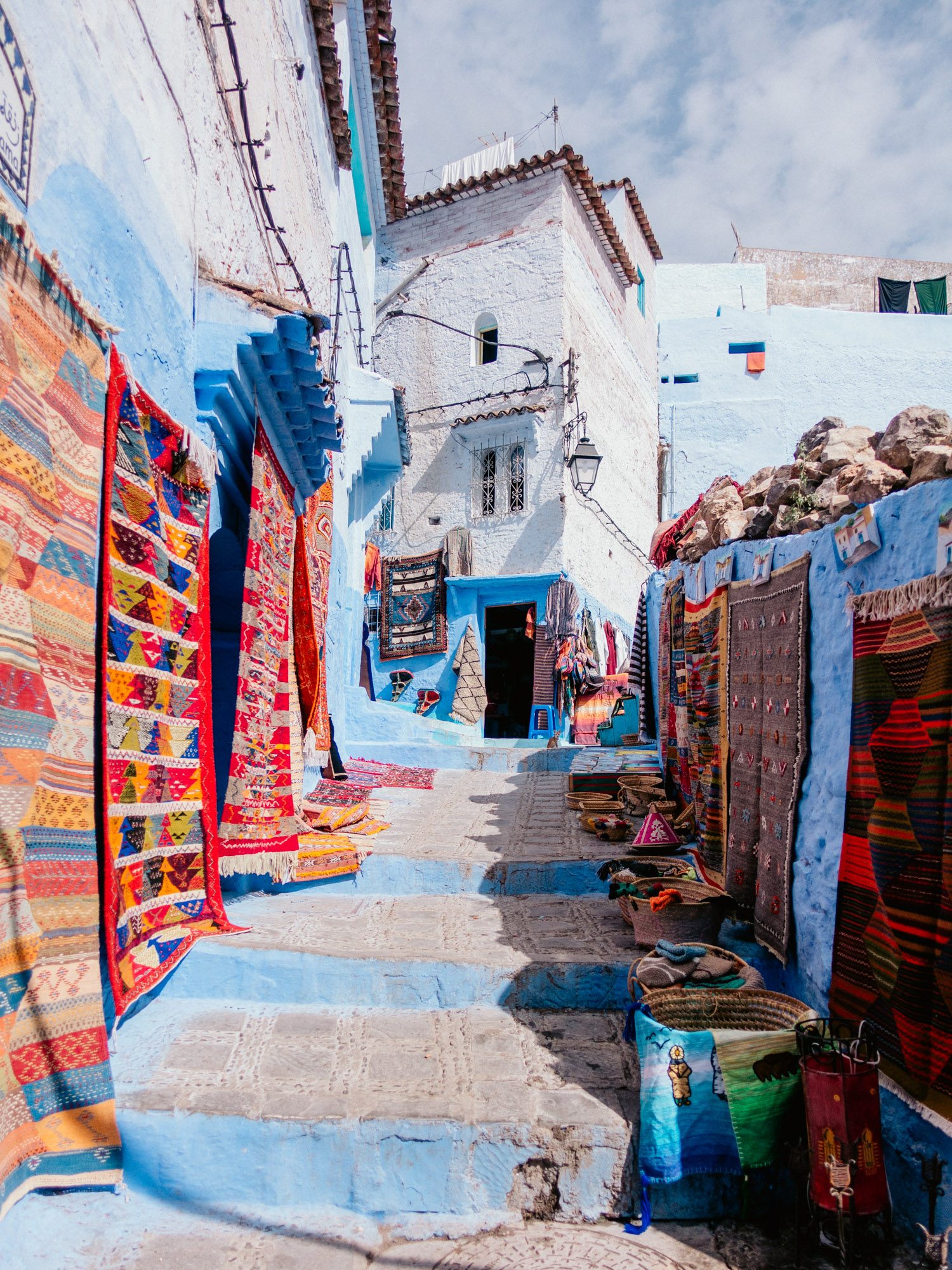 Wednesday November 14th, 2018
Comments
0 Comments
By
Siri
Tags
A guide to ChefchaouenBesichtigungChefchaouenessenMarocMoroccotravel blogtravelblogWhat to visit in ChefchaouenWhere to Eat in Chefchaouen

I had seen so many beautiful pictures of Chefchaouen on Instagram years before even planning to go on a trip through Morocco, so as it was time to plan the itinerary of this year’s trip, this place just had to be on the itinerary and boy was I surprised about its chilled and quiet atmosphere. The locals are so friendly and will always have a smile on their face – something we noticed many days later when arriving in busy Marrakech.

As you probably can imagine, the medina is heavily frequented by a lot of tourists, mainly due to its popularity on the Internet and especially Instagram. In the early morning, when everyone is still asleep, one can stroll around in the medina without all the people walking around and standing in line (!) to get a shot at one of those insta-streets.

There are two very heavily frequented spots in the medina: a long shopping street north of the medina that comes without a name (it starts at the waterfall Ras El Ma and goes all the way to the western end of the medina) and also Place Outa El Hamam. Nevertheless, in comparison to other cities in Morocco, Chefchaouen is very quiet. I actually didn’t realize there were a lot of tourists until I stepped foot on Place Outa El Hamam. This is the place where all tourists come together at the many restaurants to grab lunch or have dinner. But other than that the medina is very chilled. Just wander off the main paths, that’s where the pretty photogenic spots are!

How to get THERE

to Chefchaouen from Fez Chefchaouen can easily be reached by bus from Fez or Tangier. As we stayed two nights in Fez, we went to the CTM office near the medina of Fez the evening we arrived to Fez. The tickets cost 150MAD (per person) to Chefchaouen and also back to Fez. If you have to hand in your luggage for storage, you pay extra. I initially wanted to book tickets with Supratours but at their office, I was told that they don’t have buses that go to Chefchaouen.

CTM buses depart 4-5 times a day from Fez medina to Chefchaouen. The bus ride is about 4,5 hours (including a pause) long. It will take you through some of the most remote parts of the country, past a lake and a few small villages.

The bus drivers are very experienced but drove a little bit too fast. Especially at the end, as we approached Chefchaouen, the bus had to take several turns up the hill. One word of advice: even if you don’t get sick during bus rides, bring a plastic bag with you anyway. If you don’t get sick, someone else will and could probably use it. That was the case on my trip to Chefchaouen.

I had read a lot of stories where buses don’t have air-condition or seat belts, but this wasn’t the case for my trip.

CTM buses might depart from the bus station next to Fez medina, they don’t go back there when you come back from Chefchaouen which means that you’ll have to get a taxi to the medina (for about 40MAD). What to do in Chefchaouen

The entire city of Chefchaouen is painted in blue, with exception of a (very) few ruby-colored houses outside of the medina. There isn’t much to do in Chefchaouen. Nevertheless, I loved being there and just stroll around for a day. The medina can be visited in less than a day – unless you also want to visit the surroundings like the Cascades (waterfalls) d’Akchour or cannabis fields which they were – as we were told – initially famous for. My favorite place is called Place El Haouta, a wonderful and very quiet corner in the middle of the medina. Tourists don’t seem to be too interested in this square, but I loved having breakfast there or get a cup of coffee during the day and just enjoy the silence.

How long to stay in Chefchaouen?

We stayed for two nights which some might consider as too long. I myself thought – after our first night – that I could leave after one night. We arrived in Chefchaouen at 3 pm and already walked through half of the medina on the same day, so we didn’t have much to see the next day. I would say that it definitely depends on what you want to see. If you just come to visit the medina, a night should be totally fine. You could arrive at 3 pm and depart at 1 pm the next day. But that’s totally up to you.

Take a seat in Lala Mesouda and admire the (as it seems) randomly composed interior: leopard patterned walls, moroccan cushions, massive wooden chairs and lots of textiles. As you enjoy your lunch or dinner there, you’ll quickly notice that this is the spot where most local guides will drop off their clients. Lala Mesouda offers very traditional dishes such as couscous and tagines. Our food was delicious.

My favorite place in Chefchaouen which serves the best couscous I have ever had in Morocco! We were lucky because we went to have lunch there on a Friday and the very friendly waiter offered us some traditional Friday feast. “Friday is the holy day like Sunday is for you in your country”, he said. I finished the whole bowl even though I was already full after eating half of it. It was just too tasty! Seriously, this restaurant has not made it in a Lonely Planet Guide yet and I am so thankful for that. Bab Ssour is not packed at all. You’ll share the restaurant with many locals which is always a good sign! I highly recommend visiting this place! I craved something else after a few days of eating couscous and tagines. This place makes good pizza, however, it’s more eating cheese with pizza instead of pizza with cheese on top, if you get what I mean 😉

I absolutely loved staying in Chefchaouen, even though there are so many Instagram-streets. People are literally standing in line to get a picture in one of those famous alleys! Nevertheless, you can consider it a quiet holiday from your holiday in Morocco. It really is special.